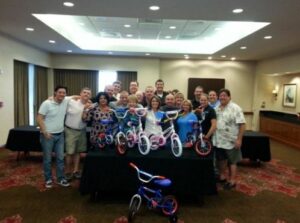 Grout Medic hosted its first Build-A-Bike. We were placed on teams of 4 and answered jeopardy style trivia questions in order to receive parts of a disassembled child’s bike. Once we had all the pieces it was a race to the finish to see who could assemble the bike first. It was a hotly contested race with accusations of pedal stealing, hiding of parts and hoarding of the tire pump, however, when it was all said and done the real winners were the 5 children from Respite Care of San Antonio. This organization is a refuge for abused and special needs children. Their faces lit up as soon as they entered the room and they immediately hopped on the bikes and raced around. It’s nice to know we had a hand in putting a smile on those kids’ faces.

Get a free estimate now