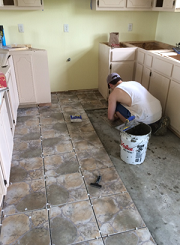 NAPERVILLE, ILLINOIS—Earlier this month, Ron Bandyk, owner of the Grout Medic of West/Southwest Chicagoland, was one of 20 participants on a weeklong trip to Clarksdale, MS to volunteer with Habitat for Humanity. For the fourth year running, Ron and his sons made the 600 mile trip down to Clarksdale, MS into the heart of the famous Delta region in northwestern Mississippi. Long recognized as one of America’s most fertile cotton-producing areas, it is also one of America’s poorest regions. As of 2009, half of the children under 18 live in poverty and the unemployment rate has grown to 11.6 percent.

This year, the Chicagoland team was charged with finishing up a home that they began last summer. Among other tasks completed, Ron, his son who is working for The Grout Medic this summer and others on the trip, installed a ceramic tile floor in the home as one of the final touches. 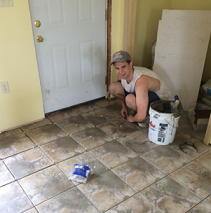 “I think it’s important that we all give back and help those in need and I’ve found that Habitat for Humanity is a great way to support these efforts,” said Bandyk.

After discussing ways franchisees could “give back” to their communities at the Grout Medic Annual Meeting, Bandyk thought that supporting Habitat for Humanity would be a good way to give back while doing something The Grout Medic specializes in — home repair.

“It was wonderful to be able to use our skills in laying a ceramic tile floor to support this project,” said Bandyk.

About The Grout Medic of West/Southwest Chicagoland

Servicing the area for over 18 years as a leader in the tile, grout and natural stone restoration market, The Grout Medic of West/Southwest Chicagoland uses the latest processes, products and equipment available to bring your tile and grout back to life! To schedule a FREE ESTIMATE, in the western suburbs call (630) 665-GROUT (4768) or in the southwest suburbs call (708) 593-GROUT (4768). For more information, contact Ron Bandyk, Owner of The Grout Medic of West/Southwest Chicagoland, via email at [email protected]