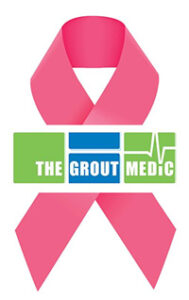 October 1, 2015 — At sixteen participating Grout Medic locations, each job in October will be an opportunity to do what they do best while also supporting a great cause. Throughout this month, every grout and tile cleaning, repair, sealing, color sealing, or tile replacement job booked at the participating locations will generate $5 in funding for the Breast Cancer Research Foundation (BCRF).

This marks the third year in a row that the Grout Medic franchise has run a fundraiser in October to support the cause of breast cancer research. Last year’s efforts were highly successful in raising money for The Breast Cancer Research Foundation. This year, participating locations grew from ten to sixteen!

The participating owners and locations are:

The BCRF has been recognized as one of the most fiscally responsible charities in the United States. Charity Navigator, a charity rating service, has consistently given BCRF four out of four stars in annual reviews since 2002. The foundation has been found to directly use $0.91 of every dollar received to forward breast cancer awareness and research.

For more information about this month’s fundraising efforts, grout and tile cleaning, or any of the services offered by the Grout Medic, call 1-866-994-7688 or visit grout.seequsdev.com